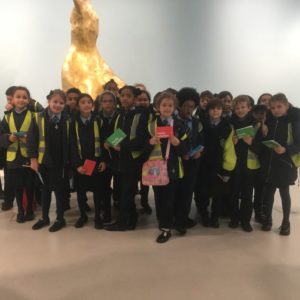 Today, as part of Class 4’s History topic ‘The Romans’, we went to visit the London Mithraeum.

The London Mithraeum, also known as the Temple of Mithras, Walbrook, is a Roman Mithraeum that was discovered in Walbrook, a street in the City of London, during a building’s construction in 1954. It is the temple of the mystery god Mithras, built in the 3rd Century AD, and is believed to be most famous 20th-century Roman discovery in London.

We explored the Roman artefacts that were found during excavations by archaeologists and used the tablets to find out more about them. We also wrote on Roman style ‘tablets’ which were made of wax with no technology in sight! Finally we went underground to the Temple of Mithras to experience what it would have been like in Roman times

We learnt lots on our trip and it was great to see some of Roman Britain for ourselves.