Feast of the Holy Rosary 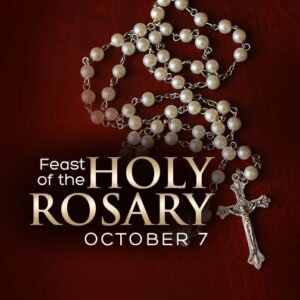 By tradition, the Catholic Church dedicates each month of the year to a certain devotion. The month of October is dedicated to the Holy Rosary, one of the best known of all Catholic devotions.

The story of the feast of Our Lady of the Rosary is an interesting one. In the 16th century Pope Pius V was having trouble with the Ottoman Turks, who were a real danger to Christianity. After months of disagreements and bickering, he was able to unite Spain, Venice, and the States of the Church in a naval expedition to fight the Turks. The two navies met in the Gulf of Lepanto in Greece on October 7, 1571. On the same day, the Rosary Confraternity of Rome was meeting at the Dominican headquarters there. The group recited the Rosary for the special intention of the Christians at battle. The Christians defeated the Turks in a spectacular victory and believed it was the intercessory power of the Blessed Virgin that won the victory.

It is because of this that Pope Pius the fifth dedicated the day as one of thanksgiving to Our Lady of Victory.

Pope Gregory 8th later changed the name to the feast of Our Lady of the Rosary. The story of the feast of Our Lady of the Rosary focuses on the intercessory power of Mary. It shows that when Christians are in danger, they can go to Mary. And when an individual is in pain, discouraged, or having trouble accepting God’s will, he or she can also go to Mary. She will pray to her Son for anyone who calls on her. Anyone who prays to Mary no longer feels alone because she prays with them and for them.

Mary encouraged praying the Rosary in her apparitions. At Lourdes when she appeared to Saint Bernadette, Mary had a Rosary. As Bernadette prayed it, Mary joined in on the Glory Be prayers.

The Feast of Our Lady of the Rosary is one of the most renowned Marian festivities of the Roman Church.  The practice of praying a rosary is popular in every major religion. In Catholicism, the rosary is generally devoted to the Blessed Virgin and requires the recitation of fifteen decades of Hail Mary prayer. The etymology of the term “rosary” comes from the beautiful Latin word rosarium, which translates “garden of roses”. The rosary beads are a spiritual version of the floral tribute to Mary. Today our Pupil Chaplaincy Team shared a video with the school telling us all about the rosary and leading us in praying the rosary.

We will all be watching this video each day of this month and praying the rosary together as a whole school.

They kindly reminded us that this is a form of prayer  as we will be reflecting on the great mysteries of our salvation.

This beautiful prayer of the Rosary will hopefully help us to become closer to Jesus and Mary. If you would like to pray the rosary at home with your family, please click here: Rosary-explanation-sheet