Rubens Landscapes with the Wallace Collection! 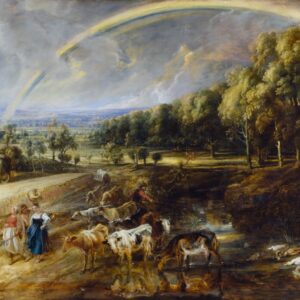 Thank you to the Wallace Collection for such a fantastic workshop today!

Rubens is best known for his work on landscapes and the Wallace Collection revealed the exciting news that two paintings by Rubens will be reunited under one roof for the first time in decades.

The children first looked closely at ‘The view of Het Steen in the early morning’. We discussed how the light shinning on the horizon showed us the time of day and all of the different types of farming going on in the foreground and background of the paintings. We saw hunting, dairy farming, butchering and crop growing. The children were fascinated by the castle. We found out that it was owned by the wealthy looking man and his wife, who turned out to be the artist himself! The class then looked at this image of Rubens and his family. Using their knowledge of the Tudor times through our Shakespeare topic, they spotted some fantastic details which showed us that Rubens and his family were wealthy: his jewellery, the purple cloth of their clothing, the ruff on his wife’s dress and the parrot in the background which was an exotic bird people used to show off their wealth. We then found out about this second painting, which was a continuation of the day from the first painting. We noticed how the rainbow was used a special symbol in the painting. Just as we use the rainbow in school to go up for doing good deeds, Rubens used the rainbow to remind of people of peace and hope during difficult times such as war.

Finally we ‘listened’ to the painting below. The class thought about the sounds they might hear during this still moonlight landscape, the wind and the rustling of the leaves…and it turned out to be our favourite painting by Rubens! Some children joined us from home and shared some fantastic ideas about the landscape paintings! Well done everyone and I hope you enjoyed the session at home just as much as we did in class! 🙂

2 comments on “Rubens Landscapes with the Wallace Collection!”