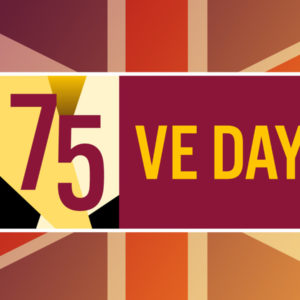 Since 1945 the end of World War Two in Europe has been marked by Victory in Europe Day, better known as VE Day. On 8th May 1945, Prime Minister Winston Churchill made an announcement on the radio at 3pm that the war in Europe had come to an end, following Germany’s surrender the day before. The long anticipated news resulted in spontaneous celebrations breaking out across the nation. A national holiday was declared and people from all walks of life came together to mark the moment. The war in the East did not end until 15 August 1945, when Japan surrendered. The day was celebrated across the world as ‘Victory over Japan’ (VJ Day). This year, the 8th May 2020 will mark 75 years since the first VE Day!

BBC Newsround VE Day: What is it? When is it? Why do we remember?

Imperial War Museum: what you need to know about VE Day How to Remember and Celebrate

In memory of this historical day, today is a Bank Holiday and there had been plans to stage celebratory events and street parties in many places but the national commemoration events to mark VE Day 75 will be scaled back due to the ongoing spread of coronavirus. Many have chosen to celebrate virtually by decorating our homes, dancing together and baking to celebrate whilst we are all in lockdown! We have lots of ideas so you can do at home. Please visit the Whole School Blog.

Culture Secretary Oliver Dowden said: “It is with a very heavy heart that we have to scale back our VE Day commemorations. Veterans always have and will be at the centre of our plans and our key priority right now is to protect their health and wellbeing.
In these unprecedented circumstances I hope that the public will understand why we have made this difficult decision and I hope they will join us in saying thank you to the generation who gave so much on May 8th.”

A Message From The Queen

At 11:00 today in the UK, we will commemorate  VE Day with a 2-minute silence. This gives us a chance to remember the sacrifice made by those who lost their lives and to reflect on the unimaginable pain and suffering caused by the war.

At 15:00 today Churchill’s speech will be broadcast and people will be invited to stand up and make a national toast, saying: ” To those who gave so much, we thank you.” At 21:00 today the Queen’s address will be broadcast on BBC1 at the exact moment her father, King George VI, gave a radio address 75 years ago.

Friend of the school, Kitty Baxter (Miss C’s mum!), who visits St. Vincent’s and talks to Year 6  as part of their World War II topic about her experiences as an evacuee, was last week interviewed by the Sunday Express.  Kitty is isolating at home so will not be joining any parties as she had planned but she has shared her fascinating childhood stories with everyone. On May 8, 1945, millions celebrated our Allied victory against the German army in Europe. The Second World War was coming to an end – but not everyone was filled with joy. Like millions of others who lost loved ones, Kitty Baxter stayed at home to mourn her little brother and her father, who would never come home.

Kitty was just nine-years-old when her life changed forever. It was 1939 and on her birthday she boarded a coach in London with her sisters. It was an exciting present, she thought, but something wasn’t quite right.

“When the coach came along we were all laughing and joking. We were given labels to pin on our clothes and a box with a gas mask inside. The boys put them on and ran around making little piggy noises,” smiles Kitty, whose two brothers were too young to leave their mother.

“I saw lots of soldiers and I thought of my uncle, a Dunkirk survivor who had visited in his uniform days a few weeks before. But no, he wasn’t there. I saw my mother crying, and off we went.”

One by one the children were selected and taken to their billets – the place where they would live. Kitty’s middle sister, Mary, was whisked away, while she and her eldest sister went to a country house where they slept in the basement and cleaned the silver each morning before school.

She was evacuated a further two times – once with her brother to Hastings during the London Blitz, as her father went to war, and again to Blackpool when the V1, doodlebugs, and V2 rockets began their attack on the capital.

Doodlebugs were pilotless flying bombs that dropped with no warning.

While the kids made mischief climbing the bombed buildings, their mother went mad with worry.

“Oh we thought it was a gas,” exclaims Kitty. “There was no school, so I became an entrepreneur, selling chopped-up wood to heat homes for a penny a bowl. I gave Mum the money, and so did my sisters, who started work aged 14. My education stopped at nine, but we never had the time or money to make it up and university was out of the question.”

Kitty was sent away again, to Blackpool, a town that holds many fond memories for her.

Not long before VE (Victory In Europe) Day, Kitty heard her father had died in battle. He was part of the Monte Cassino campaign in Italy.

“I was at home when the letter came. There were no telegram boys any more – they’d been called up for duty,” she recalls. “I had to read Mum that letter and that was it. Dad wasn’t coming back.”

“You can be careful today, but you couldn’t then. There was always a risk of being killed.”

“I don’t just think about my brother and father every year, I think about them every day. I want people to remember them.”

To remember Kitty’s dad , and many others, visit the Whole School Blog, which has numerous activities for you to take part in.