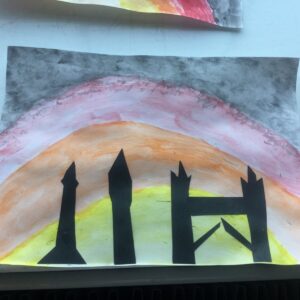 We are thoroughly enjoying our new topic, WW2!

In History we have learnt about the two opposing sides in the War: the Allied Powers and the Axis Powers, the timeline of events, the life of an evacuee and the Blitz.

The Blitz was a German bombing campaign against the United Kingdom in 1940 and 1941, during the Second World War. The term was first used by the British press and is the German word for ‘lightning’.Additional rounds of evacuation occurred nationwide at the beginning of the Blitz in September 1940.

We were shocked to see ‘Before and After’ images of famous sites in London such as The Bank of England and Selfridges. We then looked at different artist impressions of the Blitz and were interested to explore how mood is expressed through art.

During our Art lesson we used watercolours to create our own impression of the Blitz and chose our colours correctly to express emotions such as fear and anger.

Please take a look at our work below.