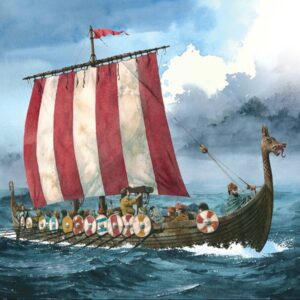 In Class 5 we are enjoying our first topic of the year – Invaders and Settlers!

We began by learning about why the Romans left Britain and found out that Rome was under attack so needed all the help it could get!
This left Britain open to invaders!

We found out that it wasn’t long after the Romans left when the Anglo-Saxons came to Britain. We now know that the Anglo-Saxons travelled across the sea from Germany, North Holland and Denmark to reach Britain. The came to Britain for all sorts of reasons…
As the Anglo-Saxons were warriors who enjoyed fighting, they took the opportunity to come and fight the Britons without the Romans here to defend them.
Some came because their land was flooded and therefore difficult to grow crops on. They needed healthy land to farm and they thought they would find this in Britain.
In some cases, whole families sailed to Britain to make new homes for themselves.
Others were invited by the Britons to help defend them against other invaders such as the Picts and the Scots. But once they were here they didn’t leave… they decided to settle in Britain!

In class we made some amazing seascape collages to show how invaders travelled across the sea to settle here in Britain.
Have a look at our art work below…

4 comments on “Invaders and Settlers – Art”