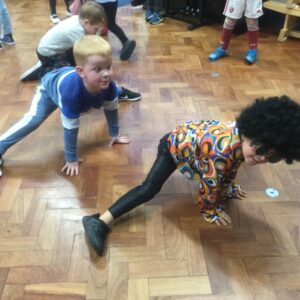 This morning Reception enjoyed their disco! They had a great time dancing together in the hall.

Everyone came to school in their best disco outfits, with lots of sparkle!

We enjoyed playing games such as ‘The Giants Keys’ where one child is the giant and they are blind folded, to see if they can hear the sneaky person crawling around their castle and getting the keys from underneath their chair!

Then we played musical statues with Nursery and it was so much fun, everyone played very well and sat out sensibly when they were not as still as a statue when the music stopped.

After these games everyone displayed their best moves when we danced all together with Nursery. We also had a lovely treat – popcorn!!

Thanks so much to the SVPA for making everyone their own box of popcorn, it was such a nice way to end our first St Vincent’s School Disco 🙂